Treatment of a Herniated Disc

Often referred to as a ruptured or slipped disc, a herniated disc occurs most often in the lower back region. Around 70% of people will have low back pain at some time during their lives, and a herniated disc condition often results in leg pain. 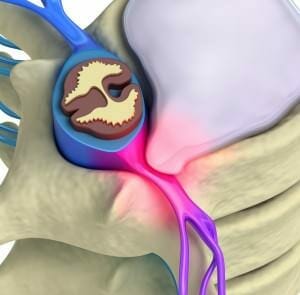 The spine is made up of 24 vertebrae, and these bones connect together to create a canal that protects the spinal cord and nerves. The nerves travel along the spinal canal, and the intervertebral disc cushions between the vertebrae. A disc herniates when the gel-like material inside pushes against the outer ring.

What causes a herniated disc?

If a disc is worn or injured, the gel material inside squeezes through the outer ring that encloses it. If the structure herniates, it can produce back pain and sciatic leg pain. For children and young adults, the disc contain plenty of fluid, but with age, these discs dry out and start to weaken. With weakening and shrinkage of the disc, the vertebrae narrow producing disc degeneration.

What are the risk factors for a herniated disc?

What are the symptoms of a herniated disc?

The back pain associated with a herniated disc is often associated with leg pain, weakness, and numbness. The leg pain will go below the knee, and for many patients, extend into the foot and ankle. Symptoms include: 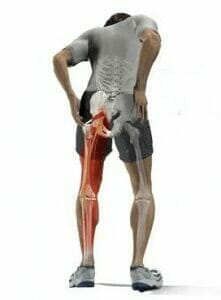 How does the Chicago pain doctor diagnose a herniated disc?

To diagnose a herniated disc, the doctor will take a medical history and conduct a comprehensive physical examination. The most useful diagnostic test is a magnetic resonance imaging (MRI) scan. This test creates clear images of the disc so the doctor can visualize the exact area that is herniated.

How does the pain management doctor in Chicago treat a herniated disc?

For many patients, a herniated disc will gradually improve over several days to weeks. Most people report being symptom-free by four months. However, many people continue to have symptoms. The nonsurgical treatment for a herniated disc includes:

Is surgery used to treat a herniated disc?

For a small percentage of patients, a herniated disc requires surgical correction. Spinal surgery is usually used only when conservative measures fail. The microdiscectomy is the most common procedure for a herniated disc.

This involves removing the herniated portion of the disc and any other fragments that exert pressure on the nerve. Following surgery, the doctor will order a rehabilitation program, which involves flexibility exercises, walking, and working with a physical therapist.