Postherpetic neuralgia (PHN) is a nerve-related pain syndrome that occurs after an outbreak of varicella zoster virus (shingles), which is the same virus that causes chicken pox. PHN causes severe pain of the affected body region.

How common is postherpetic neuralgia?

Among people age 60 years and younger, the risk of PHN three months after the onset of 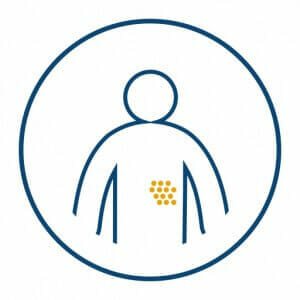 the zoster rash is 1.8%. For patients age 60 years and older, the risk of PHN increases to 3.3%, with most patients having moderate pain. Overall, PHN affects around 10% of the general population.

Varicella zoster virus (VSV) is the same virus that causes chicken pox. After an infection of chicken pox, the virus lies dormant inside the nerve cells. Years later, certain triggers can reactivate the virus, causing a shingles outbreak. After shingles, the nerves remain irritated, leading to postherpetic neuralgia. The virus travels along nerve fibers causing pain, and when the virus reaches the skin it produces rash and blisters. Long after blisters and rash heals, the pain can linger.

What triggers an outbreak of shingles?

Common known triggers include illness, stress, advanced age, certain medications, and decreased immune system function. Not everyone will have a reactivation of the virus, but the older you are, the greater the chance you will develop postherpetic neuralgia.

What are the signs and symptoms of postherpetic neuralgia?

The pain (neuralgia) is usually limited to the region of skin where the initial shingles outbreak occurred. The symptoms include:

What is the treatment for postherpetic neuralgia?

Without treatment, PHN usually eases gradually and goes away. However, more than 50% of people with this condition have symptoms that persist beyond 3 months. Doctors often use a combination of treatment modalities for postherpetic neuralgia. Options include: